Speak Out for Renewable Energy & Take the Poll

For the last couple years, talk of Tiverton embracing renewable energy in earnest has waxed and waned; on again, off again, following the ebb and flow of public interest. As Portsmouth trucks ahead, we seem to be stuck in neutral. Even when the pros of pursuing a renewable energy project gain momentum, they seem to be quickly stopped in their tracks by the ever-present cons on cost and applicability.

Well, right now, there are two bills being debated at the Rhode Island State House that could change all of this making it easier for towns to leverage all that sunshine and wind.

In last Sunday’s Projo, an Op-Ed piece by Matt Auten of Environment Rhode Island, and Jim Seveney, Vice President of Portsmouth’s Town Council, nicely explained the legislation, as well as why it is imperative that they pass. One would change the laws surrounding 'net metering' – the ability to take energy produced in one location and apply it to another – and the other would move forward in creating a new municipal energy fund to help cities and towns offset the implementation costs. Passage of these bills would certainly sweeten the pot and remove some major obstacles for more municipalities – including Tiverton and Little Compton – to move from discussion to action.

Take a read through, then take a moment to reach out to our state legislators to voice your support for these bills:


The renewable energy train is moving ahead and we’re at risk of not being a stop along the way. Consider some recent coverage about Coventry, Jamestown, and Portsmouth (again). The environmental and economic benefits of these projects cannot be disputed. We must move forward.

To that end, I'd like to introduce a new feature at Sustainable Sakonnet – the monthly poll. We're a couple days early for an April start, but what the heck. This month’s poll aims to gauge the community's support of renewable energy projects from the funding point of view. Please take a moment to share your views. We'll take the results to our elected officials to help further the discussion. Thanks.
Share |
Posted by BILL GERLACH at 3:24 PM 4 comments

Hang a Line, Save a Dime

At some point last summer, a few months into writing the blog, I was thinking about topics to write about in future posts. As I was driving down Lake Road, I happened to look over at one of the houses and what did I see looming in the backyard? A clothesline. And yep, and there was a fresh load out there blowing in the breeze drying away.

It got me thinking: That’s a real simple thing to do to conserve energy at home. Dryers have to be one of the biggest energy hogs in your house (I’ve never seen an Energy Star-rated one). So why don’t we see more clotheslines out there anymore? It seemed like a throwback to yesteryear.

So I filed that thought away, figuring I’d bring it out sometime this summer. Well lo and behold, I stumbled across this New York Times article today and what do you know? The topic of clotheslines is a big thing (relatively speaking, of course). It seems that more and more people out there recognize that letting their clothes dry outside is a simple thing that not only helps the planet, it helps their wallet. But alas, the Jones' aren’t who they used to be and most folks wouldn’t be caught dead letting their tee shirts, let alone underwear, be seen by their neighbors. (Maybe if we talked to our neighbors more and actually knew them, this wouldn’t be such a big deal…)

The Times article, led me to Project Laundry List, a NH-based non-profit dedicated to promoting air drying of clothes as a means for reducing household energy use. Get a load of that. Off their homepage you can link to a slew of stories all about the growing movement and obstacles that many face (both self-induced and community influenced) in throwing up a line. You can also link to their retail partner for a whole host of air drying paraphernalia.

I’ll be the first to say that it is not just as easy as putting up a T-bar, stringing some line, and (first finding, then) buying some clothespins. You need to make sure everyone in your household is on board with you, which is not always the case (personally speaking). But I’m going to try to come at it again this year and start small – maybe the blankets or towels or other non-gender-based items – and take it from there.

How about you? Do you dry your stuff outside? Would you? Why not?
Share |
Posted by BILL GERLACH at 8:14 PM 4 comments


View Larger Map
Has anyone else noticed what’s happening over in the Bliss Four Corners area? Or better put, what will be happening there over the next few years?

Between the new library, the artists’ community, and the re-hab of the Bulgarmarsh recreation center, this forgotten corner of town looks as though it’s on its way to being quite the destination. I admit, I’m biased here as it is close to my neck of the woods, but this is turning into a nice little area. Hopefully, the increased foot and car traffic will benefit our local independent retailers and eateries as well. (I'm keeping my fingers crossed that the corner property recently vacated by the garden shop doesn't fall victim to a chain retailer of some sort, or even worse, a competing bank.)

The $64,000 question on my mind: What will become of the old Ranger School? As far as I know, it’s not slated to be used by the school department after this academic year and I have yet to hear anything on plans for its post-elementary school life. Does anyone know? That’s a wonderful historic building (heck, I went to school there) and it would be a shame to lose it to lack of vision. Any thoughts on what it could be in its next life?
Share |
Posted by BILL GERLACH at 9:23 PM 0 comments

Many congrats go out to the Tiverton Land Trust, Manic Organic’s Nicole Vitello, the Recreation Commission, and all the countless others who have pulled together to create Tiverton’s first farmers market. This is just fantastic. More than anything, this has me really thinking about spring, summer, and all-things dealing with local food.

Why is the Sakonnet Growers Market such a big deal? It’s a win-win for anyone and everyone who participates:

• Local producers now have a new market to sell their products direct to the consumer. No middle-man to deal with means no mark-up and thus more money in the grower’s pocket.

• Visitors are spending their dollars locally, helping to boost our local economy. And with that, they get the freshest possible food. No trucking hundreds of miles to get from the farm to your table. That in itself is a huge step in lessening our environmental footprint.

• Our community binds together in new and refreshing ways. Farmers markets and the food they offer can thread together what would generally be different people from different parts of town. Not only are you meeting the farmer who grew your food, you’re meeting your neighbors.

I can’t wait for opening day on July 5 and hope to see you there!

But beyond the new farmers market, no discussion of local food would be complete without plugging our local CSA programs. Community Supported Agriculture is another cornerstone of a healthy local food economy. Here in the Sakonnet area, we have a bunch to choose from. Farm Fresh RI recently updated their listings of all CSAs in the state. Check it out, and get in early to ensure your piece of this year’s harvest.

And if you’re looking for something to read as the days are getting longer, be sure to pick up the Spring Issue of Edible Rhody. It’s always great to read about the vibrant food scene throughout the state.

It's a Function of Consumption

So it’s clearly been a while since we’ve had a post here at Sustainable Sakonnet. Time has been an extremely precious commodity for me these past weeks. As I mentioned before, I started my Executive MBA at Northeastern in January and I haven’t looked back since. Fantastic (but intense!) program if ever you were considering pursuing that.

One of the classes I’m taking this semester is macroeconomics. Now before you yawn and click off the site, just hold tight. It has given me a whole new perspective on how this thing called the American Economy works – its underpinnings, its interconnectedness (with just about everything), and most importantly, how totally out of balance we as Americans are with our consumption.

Anyone who has ever taken Macro 101 knows that consumption is one of the four components of GDP (gross domestic product), the measure by which we gauge how "healthy" our economy is. Consider some numbers from the U.S. Department of Commerce’s Bureau of Economic Analysis:

So what does all this mean? What does it have to do with the sustainability? Everything.

We are spending more than what we make. This means we’re consuming more (TVs, cars, food, iPods, clothes, etc.) than what we should. I don’t demonstrate to know why (that’s a whole other discussion) or mean to say that people are bad for doing so, but it does beg the question of where all of this is going in the long run.

The more stuff we buy, use, throw away, buy again, and so on, means the more resources we’re using up in the process. Let’s remember that these are finite resources we’re talking about here. Then tack on the downstream environmental damage such as pollution, toxins in our soil and water, and mountains of trash, or social damages such as disconnected families, depression, a loss of community, and you begin to see the bigger picture here. 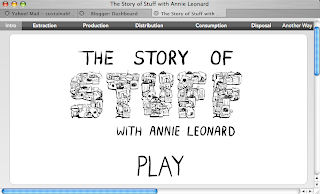 It all screams out the need for simplicity. A more simple, toned down, connected way of living. Now, I’m not saying we abandon everything and head out on some homesteading craze, but it is within our power to make simple, smaller changes. Changes whose cumulative affect can garner a positive impact.

There is a great website called The Story of Stuff. There you can watch a fantastic video that helps put it all into perspective. I encourage you to take and look and share it with others.

I'm going to make a renewed effort to post more often in the midst of school. There's so much to talk about and as always, I welcome your feedback and discussion!

Here’s to slowing down just a tad…
Share |
Posted by BILL GERLACH at 8:26 PM 0 comments 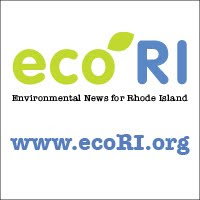